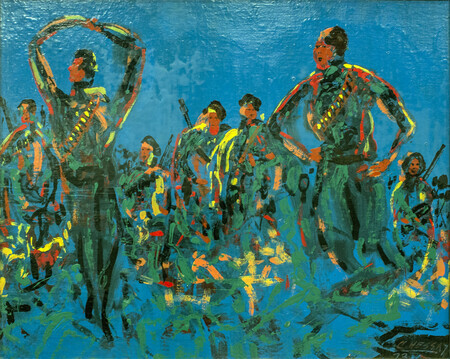 Inquire about this work

Pedro Ajala boldly shows off before battle. He was killed at Teruel in the Spanish Civil War, one of the battles in which Carle Hessay fought on the side of the Partisans.

In this painting the sense of movement and excitement is conveyed by the highlighting dashes of bright colours spontaneously applied. The dancers approach the viewer's space from the phalanx of armed soldiers.

Perhaps there is a certain defiance expressed in this very Spanish exhibition of bravado and pride since Franco banned traditional dances and other expressions of regional Spanish culture.

The blue background not only adds a celebratory air but also conveys a timeless element to the spirited bravery of those challenging dictatorial rule.