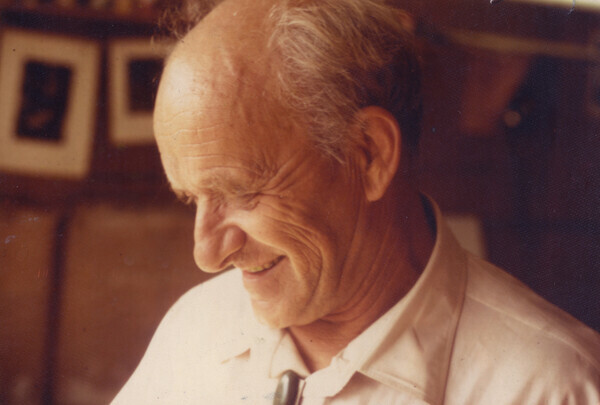 Carle Hessay: A Life of Art and Adventure

Carle Hessay received his early art education in Dresden and Paris, giving him an excellent grounding in the rigors of classical art training, as well as an exposure to the new movements in modernism. The emotional and symbolic aspects of his themes reveal the influence of German Expression. His studies included the chemistry of colour, a subject of lifelong interest to an artist who often made his own pigments.

After an adventurous period in his life, including participation in the Spanish Civil War and World War II, he led a relatively settled life in Langley, British Columbia, where he set up a sign shop to earn his “bread and butter.” It was there that he matured artistically and developed his own original style, recognizable by a certain strength that can be detected as a characteristic of a "Hessay" painting.

Although Langley in the 1950s to the late 1970s was still a rather conservative community, there was a loosely knit group of creative people who gathered for musical evenings and artistic companionship. Carle loved to play the piano at such times, as shown in the drawing by John A. McTaggart in 1954: 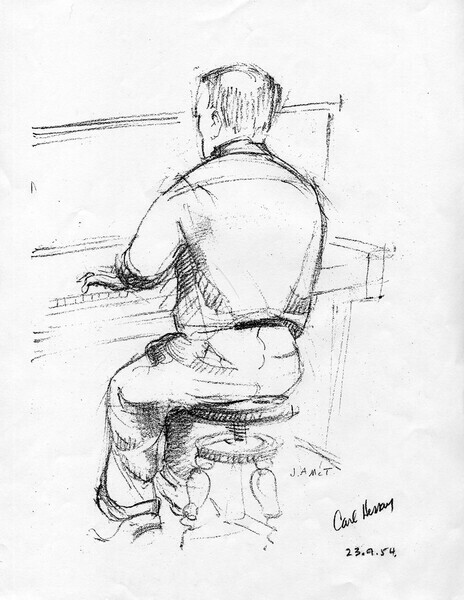 John McTaggart, the art teacher at the local high school, was a former student of Leonard A. Woods, who taught at the Vancouver School of Art (now the Emily Carr University of Art and Design). Knowledgeable in art history and the latest in modern art movements, Leonard himself had an incalculable effect on Carle's progress. From his worldwide travels, Carle was aware of European and North American trends, but it was important for him to have the critical feedback of someone like Leonard. This artistic milieux, together with Carle's former training and life experiences, came together to allow for his meteoric progress during these two decades. After Carle's passing, Leonard wrote the first thoughtful and probing exploration of a selection of Hessay's paintings in Meditations on the Paintings of Carle Hessay (Treeline, 2005). In the Foreword to the book, Leonard observed that the range of Carle's motifs was encylopedic in "covering contemporary and historical content, man and nature, as well as figure and landscape," and that his works were also "highly varied from a technical point of view." In an earlier letter he acknowledged that adding a biography was something of a conundrum because Carle had a delightfully pixieish sense of humour and would give a whole new version - about everything!

Carle himself always supported and admired the creativity of fellow artists in diverse fields. When Father Dunstan Massey from Westminster Abbey in Mission, BC wanted to know more about the actual technique of fresco painting, Carle provided him with 12 handwritten pages of detailed instructions on the process as he had learned it at the Kunstakademie in Dresden. Father Dunstan recalls Carle's emphasis on the importance of using pigments that have been proven to stand the test of time (unlike the pigments used by Van Gogh and many of the Impressionists that have degraded and changed colour). Father Dunstan's large frescoes of such subjects as the Temptation of Saint Benedict and, later, of The Celestial Banquet, a further take on The Last Supper, have earned him international recognition as a modern day Michelangelo.

Another close friend of Carle was Arnold Mikkelson, whose elegant wood carvings, including  birds and animals, are still on display in the Mind and Matter Gallery in White Rock, BC. Arnold and Carle relished debates about art and many other subjects. Carle also visited the workshop of Haida carver Bill Reid, before the latter became famous.

Carle’s prospecting trips to the mountain wilderness of this western province of Canada yielded spiritual restoration as well as pigments and subject matter for his art. In his last years, he was accompanied by his black lab dog named Sheba. He documented the remains of early pioneer settlements, deserted logging and mining operations, and natural landscapes with or without traces of habitation by man. These could often be read as visual parables with contemporary relevance. Many of these landscapes are imbued with dramatic emotional overtones and fiery colours, taking Canadian landscape art into new realms of symbolic meaning.

His mind also wandered further into what might be in store for mankind, a subject explored in his Hollow World series, part of a Canada Council Explorations Grant. Begun in 1974, these bold paintings imagine man's creation of new worlds created from the old earth. Although they were initially planned for an exhibition at the Vancouver Planetarium, many were included in the juried exhibition "Universe Inspired Art" sponsored by the NRC Herzberg Institute of Astrophysics in Victoria, BC in 2009. Some of the smaller paintings were published in For Kelly, With Love: Poems on the Abstracts of Carle Hessay (Treeline, 2014), a book authored by poets commemorating Victoria poet Kelly Parsons (see I Will Ask for Birds, Sono Nis, 2008) who was unable to commence with the project because of her declining health.

Although he was short ("the girls liked taller fellows"), Carle kept himself in physical shape. He admired all forms of artistic expression, including gymnastics, in which he was largely self-taught. At a time when the government did not support Olympic participants, Carle practiced on poles attached to two trees, which he said wasn't the same thing as having proper equipment. Carle taught John Hemmingway, an early instructor of Karen Kelsall, an Olympic champion. Jim Sydor remembers Carle as a fellow gymnast who went on competitions around BC. When he joined the Canadian Armed Forces, Carle was recognized for his qualifications as an instructor of gymnastics.

He also loved to play chess. When he went on his prospecting trips into the BC wilderness, he always had a miniature, collapsible chess board in the glove compartment of his old Datsun truck (in the age before instant communications on the internet, he played by mail with other chess masters in Canada and would eagerly await the mail for their next moves).

His infectious sense of humor and his kindness endeared him to his many friends. In his shabby paint-spattered clothes, his was a non-threatening presence. His deeper feelings and thoughts were manifested in his paintings, and it is through his paintings that we can know the man.

"What does money do? It goes somewhere, a stock, a bond. I don't see it. But a painting I can look at every day and enjoy." Barbara Streisand ("Streisand did last 'exhausting' tour for a painting," interview by Mesfin Fekadu, printed in the Times Colonist, Nov. 26, 2017, page C10).