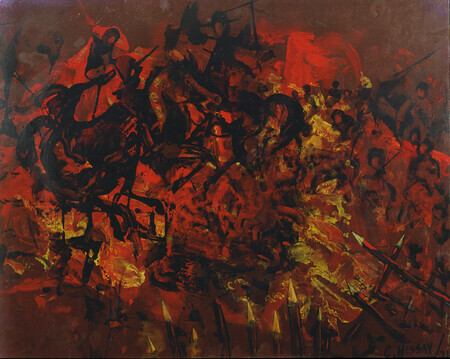 Inquire about this work

This prophetic image is evocative of the four horsemen of the Apocalypse, representing war, plague, famine and death (Rev. 6).

As Leonard A. Woods observed: " A suffocating and claustrophobic atmosphere permeates the scene, enveloped as it is in the flames and smoke of war.....Carle, whose personal experiences of the reality of war embraced both the Spanish Civil War and service in Europe for the Canadian army during the Second World War gives us a contemporary interpretation. Through his imagery, he shows the discharge of evil as from the dark, fear-ridden recesses of the collective unconscious into active, deadly violence." (Meditations of the Paintings of Carle Hessay. Trabarni Publications and Treeline Press, 2005, page 15).