CARLE HESSAY IN HIS STUDIO 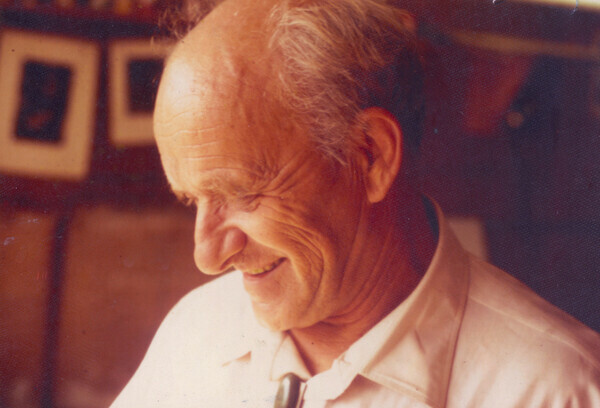 Carle Hessay's artist's statement, or what effectively serves as such, was included in a letter to a friend who wanted his advice on her work: "I believe it's perfectly natural for a person to have a creative urge which cries out for expression. When I look at a painting or listen to a musical composition, I try to understand the reason why this was created in the first place. I like to look at paintings that are original, of the artist's own imagination, (and) if they're poetic and communicate ideas that are new and exciting, I enjoy them that much more."  (Courtesy of Kelly Garner)

Anyone of his many friends would be greeted with warmth and mischievous humour when coming upon him in his studio in Langley BC. In this photo of Carle at work, some of his small abstract paintings are hung on a line on the wall behind him.

A Hessay painting, whatever its subject or degree of realism, is immediately recognizable by its power, expressive use of colour, and mastery of technique. As observed by art enthusiast David Douglas Hart, Carle took all the different modern art movements of the twentieth century and made them his own.

In particular, Carle "absorbed the artistic energies that characterized the 1960s" (Leonard A. Woods, Meditations on the Paintings of Carle Hessay, Trabarni, 2005). His dynamic paintings include abstracts, urban scenes, landscapes of the deep BC wilderness, ethnic, mythological, and biblical scenes, as well as Future World images.

This site will be updated on an ongoing basis to add more paintings and additional information.

Variations in dimensions between metric and imperial measurements may depend on whether the paintings were measured unframed or inside the frame. The sizes of the thumbnail images do not reflect the relative size of the paintings.